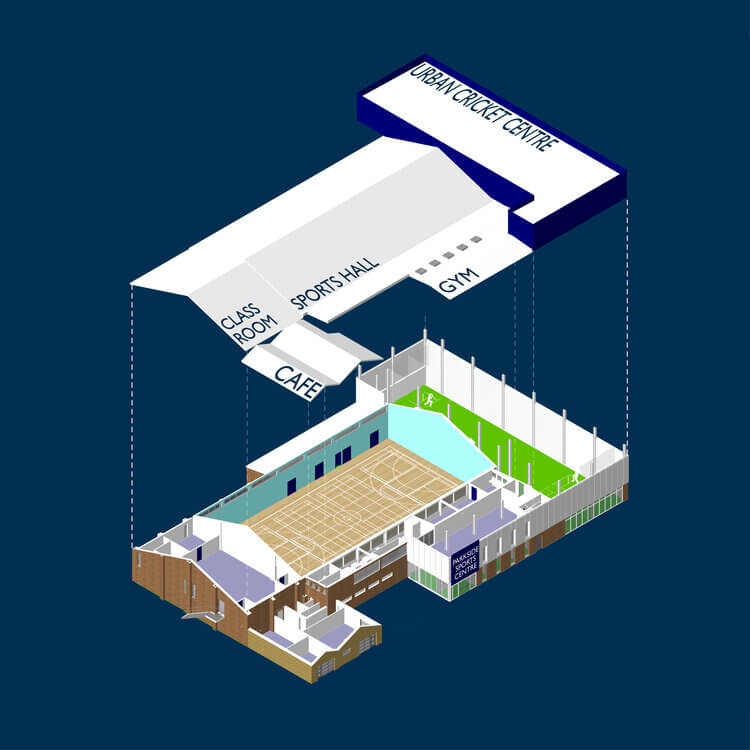 Bradford Trident with support from ECB and guidance from Yorkshire Cricket Board has been developing plans to extend the Parkside Sports Centre.

A central element of the development plans includes a new multi-sport hall which will house elite standard indoor cricket nets and bowling machines. Yorkshire Cricket as well as some local clubs have advised on the Sports Development Plan which accompanies the capital programme and will see the roll-out of a club development and support package including volunteer recruitment, training and support.
This is an ambitious project with a 1.8M price tag for phase 1.

To date, Bradford Trident has secured £975,000 and has applications pending decisions on the majority of the remaining funds. Generous supporters so far include England and Wales Cricket Board, Power to Change, Sports England, Garfield Weston Foundation and Sovereign Community Health Care. If anyone wishes to contribute towards the costs of this major sporting asset for Bradford they can donate via the “Get Involved” page of the Bradford Trident website. All donations are very gratefully received.

The need for the project is to help tackle Bradford’s rising crisis with obesity. One of the most enjoyable ways to individually tackle this issue is to take up a regular fun and social sporting habit, like cricket. Bradford Trident exists to serve the needs of the community of Little Horton and as such wishes to provide and operate the best possible facilities to enable everyone has the opportunity to enjoy regular sport and physical activity. Just 20 minutes a day of physical activity can have tremendous benefits for your health and well-being.

Opened on Friday 20th March 1964 Parkside Sports Centre has been a springboard for many of Bradford’s sporting heroes including Arsenal’s Chris Kiwomye, Bradford City and Newcastle United’s Des Hamilton, and most recently, Leeds United and Aston Villa star Fabian Delph, all of whom developed some of their athletic abilities whilst playing at Parkside. The support of these former centre users would be particularly welcomed in this new chapter for the Centre.

Bradford Trident is aiming to complete the funding package for the Centre by the end of March 2021 and if successful will see the extensions to the centre opened this time next year.